The Chatham Arch Historic District exhibits both historical and architectural significance. Its irregular street pattern, most of it dating before the Civil War, recalls life in Indianapolis when the city was just beginning to expand beyond the original Mile Square plat. The area also boasts a group of Civil War era workers’ cottages on Arch, St. Clair, and 9th Streets. These houses represent the working person’s presence in the early stages of Indianapolis’ growth into an industrial metropolis. Only a few pockets of these 1860’s and early 1870’s cottages survive in the downtown.

The northern portion of Chatham Arch illustrates an unusual mixture of housing types. Here, workers’ cottages, middle class residences, rental duplexes, apartment buildings and flats, commercial buildings with second floor sleeping rooms, and a few large homes of the wealthy all existed at the turn of the century.

Massachusetts Avenue is the primary commercial district in Chatham Arch, and it exhibits several fine post-Civil War and early twentieth century commercial buildings, which recall the close relationship between the neighborhood merchants on the Avenue and the neighborhoods to the north and south. The Real Silk Hosiery Mills complex, formerly home of one of the country’s main silk hosiery factories, is evidence of the neighborhood’s industrial significance along College Avenue.

The Chatham Arch area also contains the historical roots of several major religious denominations of the city. One of the oldest black congregations in Indianapolis, Allen Chapel AME Church, has occupied a location in the area for over 116 years. The former First United Brethren Church was represented by two different church buildings on Park Avenue. One of the largest German Reformed congregations of the city built Zion Evangelical Church at the west edge of Chatham Arch. The Roman Catholic Church was represented from 1880-1949 on the southern edge of the area by St. Joseph’s Parish.

The library at the Indiana Historical Society has a collection of Sanborn fire insurance maps from the 1800s which show the original street names and structures in Chatham Arch. 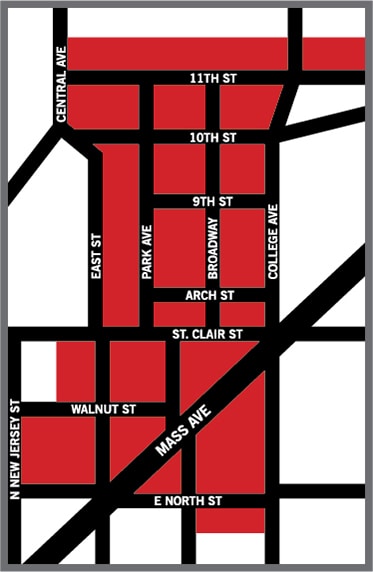